What they create and where:

The company is one of the world’s leaders in the development of multilateral systems and technologies for tracking and recognizing items on a multistatic basis. In other words, and translated into “human language”:it develops, manufactures and implements systems to ensure the safety of air traffic, for both civilian and military purposes. The headquarters of the company are in Pardubice. Other branches and subsidiaries operate in various parts of the Czech Republic and Slovakia.

What are they innovative about:

Development and innovation in the field of passive radiolocation are firmly part of the company’s DNA. Among the most significant achievements is the unique passive tracking system VERA-NG for tracking and identifying targets in the air, on land and at sea, usable for air defense and modern electronic warfare. ERA has defined a new category of sensors, the so-called PET (Passive ESM Tracker). It has clearly entered the history of air traffic control. It has promoted multilateration among the basic technologies for tracking the movement of aircraft from takeoff to landing. Its intention is to continue to market new technologies that will be able to face today’s challenges.

The company was established in 1994, when it continued the more than 30-year operation of the company Tesla in Pardubice. Today it has a foreign owner and has won the prestigious Superbrands title. It has been a success in NATO’s competition for the best technological innovation. 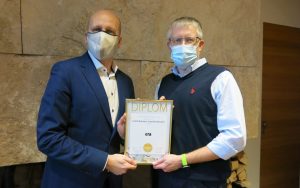 More than 130 commercial entities – civil and military customers in 66 countries around the world – have chosen ERA as their system supplier. The company exports to Europe, Africa, Asia, South and North America and the Middle East. (more here: https://www.era.aero/cs/o-nas/references-and-case-studies).

You can find out more about which cookies we are using or switch them off in settings.

This website uses cookies so that we can provide you with the best user experience possible. Cookie information is stored in your browser and performs functions such as recognising you when you return to our website and helping our team to understand which sections of the website you find most interesting and useful.

Strictly Necessary Cookie should be enabled at all times so that we can save your preferences for cookie settings.

If you disable this cookie, we will not be able to save your preferences. This means that every time you visit this website you will need to enable or disable cookies again.

This website uses Google Analytics to collect anonymous information such as the number of visitors to the site, and the most popular pages.

Please enable Strictly Necessary Cookies first so that we can save your preferences!

Please enable Strictly Necessary Cookies first so that we can save your preferences!